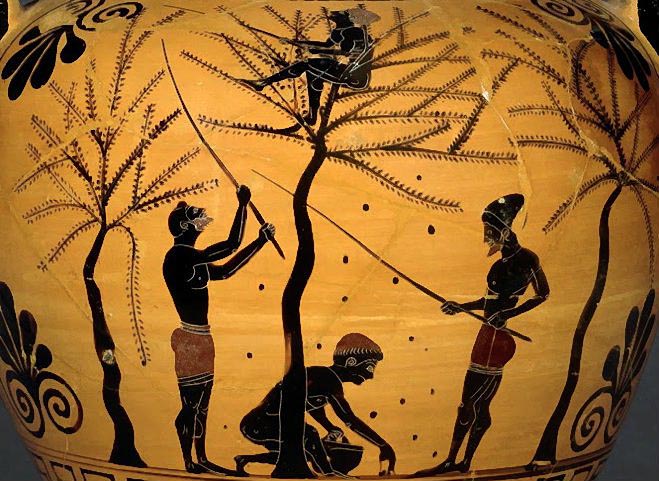 OLIVE OIL NOW AND THEN

OLIVE OIL NOW AND THEN

The Olive oil, the “liquid gold” by Homer, is a miraculous source of nutrients for human and is the secret of longevity of the inhabitants of the Mediterranean basin.
Since ancient times it is well known that consumption of olive oil is crucial to the health. Asclepius and Hippocrates, fathers of Medicine, as well as the greatest doctors of that time, Galen, Dioscorides, and Diocles firmly believed in the beneficial impact on health and recommended it on a daily basis as a treatment in many cases.

It is used since antiquity as food, drug and cosmetic. It is also mentioned in Homer, as a mean of grooming and against skin diseases. In Hippocratic Code one can read over 60 pharmaceutical uses. The ancient Greeks used olive oil to heal wounds, to treat insomnia, nausea, cholera etc. They also used it to soak and soften their skin or put it in their hair to be healthy and shiny.

Modern scientists believe it helps the functions of our brain, our internal organs, especially the heart, since olive oil anticipates and takes the place of the harmful animal fats, which are responsible for the accumulation of fat in the heart and lead to heart attack.

Today, 3000 years later, modern medicine continues to recommend the widespread use of olive oil in the diet of adults and children, healthy and sick, thanks to valuable ingredients that provide health, wellness and longevity. Many scientific studies have shown that olive oil is a key ingredient of modern nutrition.
Researchers at the University of Athens thought to investigate if the ancient Greek writers had a special report on the medicinal use of the olive oil. Surprisingly it was found that two thousand years ago Dioscorides recommended it as the best oil for health the one that was called “omotrives” or “omfakino”. Indeed, he advised using this oil for toothache or headaches such as, i.e., use today classical NSAIDs. It is clear that Dioscorides talked about an oil that today is known as green olive oil, the one that is produced from unripe olives at the beginning of the season (raw or omfakinos is the immature fruit).
Since ancient times, it was known that not all olive oils had the same activity for the health protection. Today researchers found that the substance responsible for the distinctive feeling of burning in the throat caused by certain olive oils (it is called elaiokanthali), has strong anti-inflammatory activity comparable to that found in classical medicines we frequent use. Researchers have developed a qualitative and quantitative method analysis of the oil in its 4 bioactive components namely the substances elaiokanthali, elaiasini, aldehydic form of oleuropein aglycon and aldehydic form aglycon ligkstrosidi.
For those active substances already exist in literature several studies that attribute them anti-inflammatory, antioxidant, neuroprotective, cardioprotective and other properties, although research continues. These substances are derivatives of Hydroxytyrosol and Tyrosol, ie substances that the new European legislation (according to the opinion of the European Committee for Food Safety) specify which olive oil can be indicated on the label, for the health protection.

Olive oil polyphenols contribute to the protection of blood lipids from oxidative stress. The cluster of elaiokanthalis elaiasinis and derivatives contained in the olive oil with the above concentration, has protective properties for our health and have a positive effect in preventing heart attacks, fighting inflammation, and recent research has shown that fortify the body against Alzheimer disease.

It should be stressed that the quality of olive oil and the concentration of polyphenols, depend on many factors (more than ten), some of which are:
– The DNA of olives,
– The ground,
– The microclimate,
– The harvest time, which varies by region.
– The mill
– The time between harvest and production of oil,
– The temperature and kneading time and several other factors.

Our observations into olive cultivation and olive oil production showed that if an factor is different, we have different polyphenol content, even from the same estate.

In summary olive oil is an ideal food and in addition:
1. It protects the digestive system, it reduces ulcer creation.
2. It helps in proper bone development of children and is a major metabolic equilibrium factor.
3. It is a weapon against osteoporosis, and thanks to vitamin E slows the deterioration of cells leading to natural aging.
4. It plays an important role in the treatment of diseases of the bile and impairing the formation of gallstones.
5. It reduces bad cholesterol and increases good. The constant consumption of olive oil reduces mortality from cardiovascular and cerebrovascular diseases.
6. It assists in preventing bowel, breast, and prostate cancer and generally protects the cells and DNA from any deterioration that may lead to cancer, because oleic acid
7. It reduces rheumatoid arthritis likely to cause.
8. It improves colon mobility.
9. It presents significant beneficial effect in the treatment of diabetes. It helps in proper metabolism functioning and is essential for those suffering from diabetes, it balances the sugar.
10. It helps in smooth functioning of the arteries and prevents the formation of blood clots.
11. It lowers blood pressure and helps in the treatment of hypertension.

The olive oil in order to give overall shield to the human body, as mentioned above, it must be a quality, extra virgin olive oil, organic, rich in polyphenols. For consumers consumption such certification is required to be listed on the packaging.

The product of olive oil LIVA range, produced in the Organic Farm “KRIMNIANIOTI’S FARM” in Messinia, far exceeds this limit (see. Certificate), and bears the certification of Health Claim.

As certified by the concentration of polyphenols in our olive oil, the beneficial effect is obtained with the recommended daily intake amount of 20g olive oil.